A Year of the Goodbye Family

On the anniversary of the Goodbye Family, we interview creator Lorin Morgan-Richards about the past and future of the eccentric trio.
By: J.A. Pringles | November 28, 2016

When we started Steamkat.com a year ago, Lorin Morgan-Richards was one of the first creators that came aboard.  His first creation for SK was the “Goodbye Family” comic strip, based on his family of characters that have previously appeared in book form. 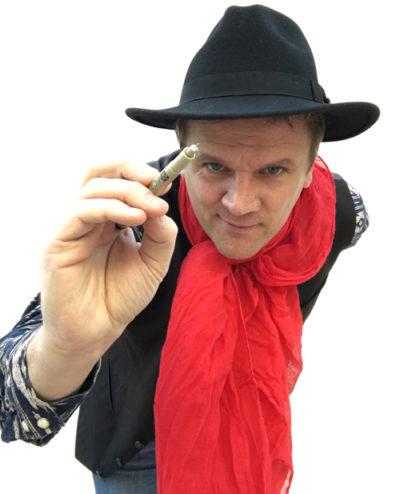 Steamkat: It’s been one-year since you started The Goodbye Family comic strip on Steamkat.  Was that the first appearance of the characters?

Lorin Morgan-Richards: In 2009 I came up with the characters of The Goodbye Family during a trip to the UK and France with my wife Valerie. Before this they were mentioned in my western novel Me’ma and the Great Mountain when Hollis Sorrow, a companion of Me’ma (the protagonist), is first seen floating along in a casket with the words Goodbye Family Funeral. So the family was stirring in my mind while writing my first novel, but hadn’t been documented until their first illustrations as a family being on vacation. I took a diary on the trip in order to write my second novel The Goodbye Family. The Goodbye family consisted of undertakers Otis and Pyridine, their daughter Orphie and her pet tarantula Dorian. Orphie was first seen atop the Notre Dame Cathedral with gargoyles, Otis was trying to board a train at customs with a shrunken head, Pyridine was sewing a limb back together in Cardiff, and Dorian was capturing a fairy to eat. Following these illustrations, a cat Ouiji was unveiled and Orphie is said to have a brother named Kepla, but he is hardly ever seen and it is unclear if he even exists.

SK: What can you tell us about the character’s in “The Goodbye Family?

LMR: That’s what is great about the comic strip. Every week you get to learn something new about the family. So far we know from the strip that the family lives in the old western town of Slug and does business in the larger neighboring town of Nicklesworth. Otis drives a hearse carriage led by his horse Midnight and Pyridine is a master of alchemy and preps the bodies for the grave. Orphie has the strength of an ox and has the responsibility of carrying all the caskets.

A power hungry tycoon named Baron Von Nickle rules over the land and can be seen preaching of gold from the nearby Purple Mountain. The Baron is the main antagonist in Me’ma and the Great Mountain.

The first episode of “The Goodbye Family,” from Lorin Morgan-Richards. You can click the image to enlarge

SK: Did you have any influence from fiction or real life when creating the characters?

LMR:  wouldn’t say. I will mention that some believe Orphie is based on my own daughter, but I’m not sure how that can be since Orphie was created two years before my daughter was born. Though life does have many funny moments if you pay attention and these do translate well into comics.

SK: After drawing the characters and strips every week for a full year, do you see a difference in how you approach the comics from the beginning to now?

LMR: The characters have evolved slightly in appearance and have settled nicely into their Victorian Western comedic-drama. Pyridine I’d say has changed the most, as she has worn at least three different funerary dresses.

Stylistically I am also actively discovering and learning new techniques.

SK: Can you give us a step-by-step walkthrough of the creative process you use for the GBF?

LMR: Yes and this goes back to answering your question about my approach, I’d say, it’s been pretty consistent. I think up a joke that would either go well with The Goodbye Family or The Noodle Rut. I draw it out with pencil, then as I go I might rethink the joke before applying the ink. I add shading as a final step with the pencil again.

SK: Any plans to introduce other family members from the family, or expand the cast in another way?

LMR: There are quite a few characters that may pop up from the first novel. Besides Me’ma and Hollis Sorrow who already made appearances, I think Madeline Sage is the next in line. Sage was another traveling companion of Me’ma’s who originally was in a circus. She was mistakenly cut in half during a terrible magic act and uses a belt to tie her two working halves together.

There will also be many new fantastical characters my readers will love as we get to know the family more.

SK: Beside comics, do you see the GoodBye Family in other media, such as a book or animation project?

LMR: My intention remains to put out The Goodbye Family novel in the next year which is about 3/4ths of the way completed. It will interplay well with the first book but I can’t say much more than that.

I will also be releasing The Goodbye Family Album in early 2017 with all of the illustrations from both The Goodbye Family and The Noodle Rut series, plus other works including Now that’s a Silly Goose, the Mini Monster Book, and 13 Disturbing Postcards to Send to Your Grandparents.

You can catch the Goodbye Family every Monday at Steamkat.com., and by clicking here for archived episodes.   For more from Lorin Morgan-Richards, check out his website at LorinRichards.com