Our first featured article on Steamkat focuses on the newly released book, Dark Letter Days, by Lorin Morgan-Richards. In this interview, Lorin speaks about his creative process behind his poetry and illustrations.

Some of you may know Lorin from his two recurring comics here at Steamkat, The Goodbye Family and The Noodle Rut, appearing every week. Dark Letter Days takes Lorin back to his earlier work of poetry, along with illustrations to several of the poems.

SteamKat: Your new book is out, what can you tell us about Dark Letter Days:

LMR: Dark Letter Days: Collected Works was compiled over the course of 10 years, beginning with the poem Buzz and Flutter written back in 2006 while I was attending California State University, Los Angeles. This was around the time I started writing my short stories, notably Simon Snootle. As I continued to write my stories, I began to realize I had journals of poetry and spoken word that did not fit well with the dark yet whimsical tales I was spinning in my books. While Dark Letter Days has the dark satire my readers will recognize in my writing, there are also more serious commentaries on life: bullying, feeling like an outcast, losing a friend, things that are more contemplative while sitting in the shadows. Almost all the passages have illustrations to correspond with the work. 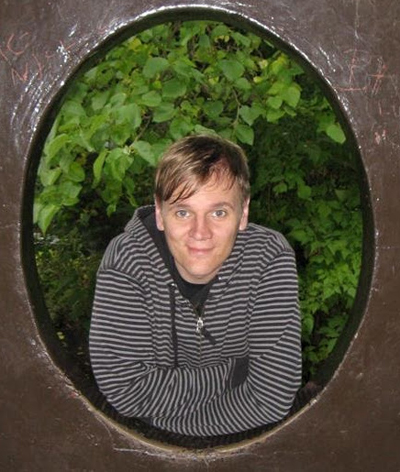 SK: You live in Los Angeles, but where are you from originally?

LMR: I was born in Beebetown, Ohio, where the family home was an old converted school house built in 1874. Some of my father’s family lived in the area since the late 1700s and there is still a pear tree on the property that was planted from these early days. Growing up we used a well and cistern for water, and there were a variety of farm animals to take care of, most of which were cats. The stream at the bottom of the hill behind the house my brothers and I would race boats on, and we spent hours in the woods playing – trying to avoid the poison ivy.

SK: When did you start writing poetry and illustrating?

LMR: In childhood I often incorporated the pets into my stories, especially the twenty odd cats we had. I believe my earliest creations were tiny comics I called Cat Co. These contained stories about cats that had super powers. When I was about eight, I was creating my own line of Garbage Pail Kids cards. You see, my mother, Karen, took me with her to school and work, so I spent quite a few hours alone in the car, hallway, or in an office doodling (this was quite normal back in the day…I think). She always had a pen and paper to keep me busy, which suited me just fine. She was an art student herself, but had to delay her craft to raise my brothers and I. When I entered second grade, it was noticeable I suffered a form of dyslexia and had tutors from 2nd to 9th grade to help. It was tough at first, but gradually I got better, and I guess it didn’t help I preferred drawing over reading. In my early teens, I discovered works by Edward Lear, L. Frank Baum, Roald Dahl, and Lewis Carroll which all had aspects of non-sense in their stories and quirky characters with illustration that told me reading IS fun and it is okay to be a little different!

SK: In your illustrations you primarily use black and white imagery, is there a reason for this?

LR: There are touches of pencil shading also that give it a rustic look. Growing up in Ohio I remember a lot of rainy and wintry days that cast cloudy grey skies. Of course, in the farm country and hills especially, there are also beautiful days after it rains and if one should follow the seasons in Ohio they are like no other. But for some reason the grey tones seem to stick with me. Did you know in the middle ages grey was the color most commonly worn by peasants?

SK: The poems in Dark Letter Days seem to be a mix of introspective, pensive thought, combined with the ethereal and fantasy.  What brought you to this mix in compiling this volume

LMR: There are highs and lows in life. Sometimes reflecting on these extremes in a silly yet serious way, brings a laugh to the reader that says, hey my life is not that bad while still being able to relate to it.

SK: Do you tend to illustrate at the same time that you prepare the poem, or are the illustrations done later, giving you a chance to recreate the emotion of the poem with a fresh perspective.

The only time I would illustrate something then write after, is with The Noodle Rut or The Goodbye Family cartoons. But even then, I have a vague idea of what I’d like to say. In order to hear my voice as a storyteller I write then illustrate. The illustrations definitely evoke what cannot be seen in words by themselves. In the same respect,Dark Letter Days has a channel on Youtube with passages I’ve selected to read from the book.

SK: What is the creative satisfaction you get from creating poetry, as opposed to more light-hearted work with The Goodbye Family and The Noodle Rut.

LMR: Excerpts from Dark Letter Days spill out of me. I may be walking down the street and suddenly have this thought in my head that needs written down. I continue to work with it, and eventually get it to a point where I know it’s finished. If I instead ignore the thought, it would probably haunt me until I expel it from my mind. [laughs] But these passages are things I feel are important to share. I’m grateful I have an outlet to do so.

SK: What else are you currently working on now?

SK: How can a reader get a copy of Dark Letter Days.

LMR: Dark Letter Days is available by order through Barnes & Noble, Amazon, and direct through A Raven Above Press www.aravenabovepress.com.

SK: Is there anything else you’d like to say to our readers?